First we must pay homage to the following movies:

Let it be said that one should never pay attention to critics, friends or loved ones. If I had done so, I would have never watched, The Love Guru, which at the risk of ridicule, I will confirm to be a master piece. Perhaps, me and Mike Myers are the only two people on earth who think so, but what gives. I laughed heartily during the entire movie. And special credits to Mr. Justin Timberlake, who I thought did very well in the movie.

As for the other two. Harold and Kumar, well done too! your insanely stupid movie also had me in fits. Perhaps, because it followed immediately from The Love Guru (which I watched on the same night), I was in the mood for pure stupidity. Perhaps I am regressing myself, I have been suspecting a kind of loss of intelligence lately and we will get to that later.

Moving on to ‘Frustration’

We get frustrated when we are unable to find expression, when our energies find themselves trapped within us, unable to find avenues to expend themselves. I have been regressing, philosophically, finacially, businesswise, socially and mentally. More ever, I am unable to do much about it, every action seems to have a way of compounding my predicament. I seem to be taking on the world and getting nowhere.

My recent trip to Burning Man was nothing short of a pilgrimage, a journey that I heavily paid for. I can say nothing more than it is a Haj for the freeminded, a pillar of free society. You have to be there to feel it, to feel the playa sand on your skin, the openness to nature and what creative people can do. I highly recommend it. 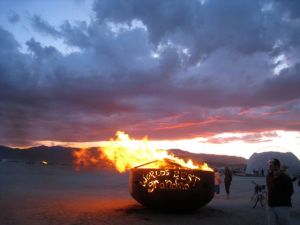 But the question still remains and I am unable to answer it. The question is of, ‘what to do?’. I am unable to think of ‘what to do’. All that I am doing right now is just a reaction to the demands of people around me. My business demands that I administer it, my staff demand their salaries, my family demand that I be part of it. My body demands to be fed, and my mind demands drugs that can block everything out. I seem to be doing only what is being demanded by the various parts of me. My every action is a reaction – I am frustrated.

And what is it that we do anyway? We eat, shit, sleep, fuck & build. I was speaking to a friend yesterday about the credit crisis and the collapse of Lehman bros. He asked me what it means and I answered in no short terms, ‘we eat, shit, sleep, fuck & build’ and that is all any of us ever do. The credit crisis is nothing but a case of over building. We have got highly efficient at it and is underlies the whole economic system. More companies, to build buildings, cars, computers, gadgets, bridges,dams, mines, refineries etc… it bores me and I am frustrated. Money comes out of the ‘Ground’. It can’t be given away, so it is loaned to us on credit, and then we have to work for it to pay back the loan. That’s the modern economic system. Simple. The crisis occurred because the loans were given to people who have nothing to do, or more correctly who can’t do anything apart from the same.

All philosophies just to reconcile ourselves with the fact that everyone just wants to earn some money so that he can ‘eat, shit, sleep, fuck & do more building’. Leave me alone we all say, I just want some money in the bank so that I can continue to live with all my belongings.

The crisis right now isn’t Credit. Believe me, there is plenty more where that came from, they just don’t know who to give it to, and under what terms. That’s not a crisis. The crisis, is ‘what to do’. That’s the real crisis, but noone wants to admit that one, because it’s just too big. What are humans to do, where is the creativity in that? What I hear you say, ‘leave me alone, I just want a job that pays me well’. that’s right, you just want to bury your head, do a job and get paid. That’s the f’kng crisis and I am frustrated.